this entire section under construction.

Simplifying macros on a multiple-lamp fixture

As the prices for LED lighting continues to decline and the technology moves forward, some manufacturers are creating new DMX fixtures that contain multiple lamp heads.

The new Chauvet 4Play is a single DMX lighting fixture that contains four indivudual lamps heads. Each lamp has red, green, blue, and white LEDs that can be programmed to display 36 different patterns plus “off”, for a total of 37 different states. 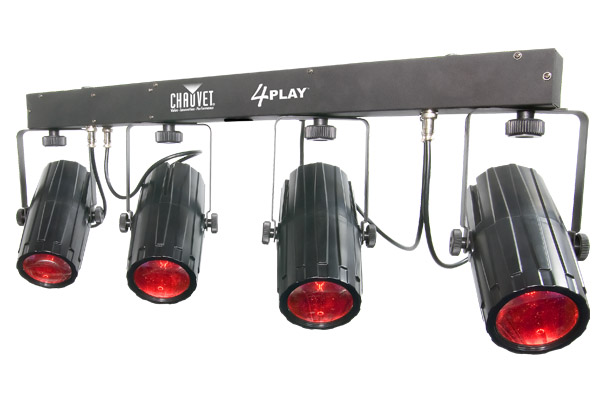 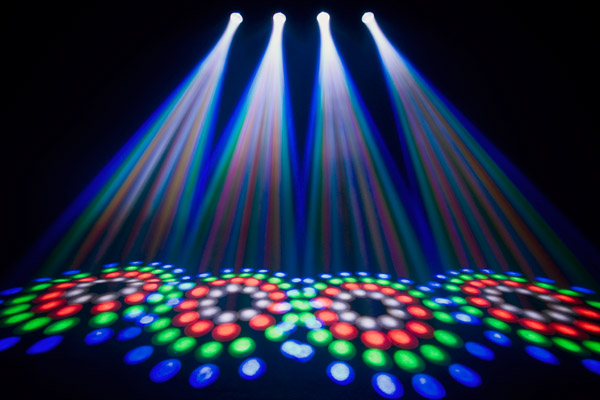 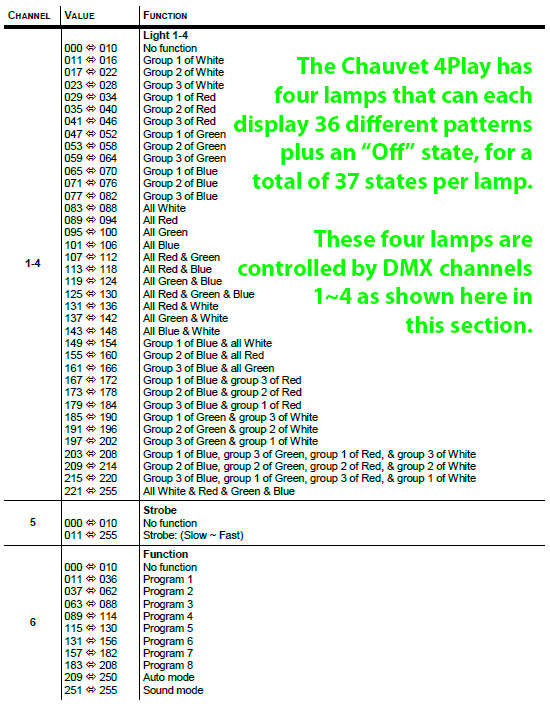 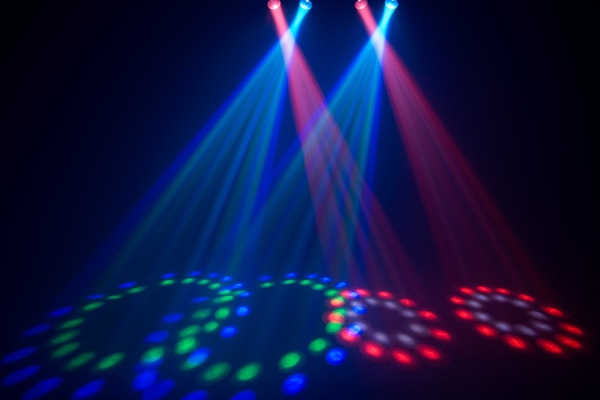 To display all 37 different LED lighting patterns on all four lamp heads, previous versions of Fixture Creator and FreeStyler would have needed 4 X 37 or 148 total macro buttons. Not only are 148 macro buttons cumbersome, but it also reaches the limits to how many buttons can be placed on the Macros window in FreeStyler. With the new Formula feature, we can reduce the number of macros needed by simply creating 37 buttons for the lighting patterns, and then creating Formula macros to assign the pattern to each of the four lighting heads. Additionally, by using the new Show In feature we can place the macro buttons conveniently in the fixture's Gobo window. 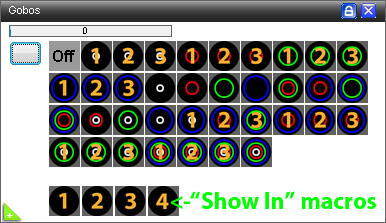 In most LED fixtures, the light emitted by the colored LEDs are combined to create a spectrum of colors. But in the Chauvet 4Play, the light beams are kept separate to create multi-colored patterns. Since this has the same visual effect of using gobos on a projector head, gobos were used to identify the 37 different LED light patterns. The “goboch.1” is filled with the value “1” to identify Channel 1 (the channel number for the first lighting head), and “no gobos” field is filled with the value “37” to identify the number of light patterns.

After the “goboch.1” and “no gobos” fields are filled in, the “1st gobowheel” tab automatically appears. There will be 37 blank rows, corresponding with the 37 gobo number entered previously in the “no gobos” field. Fill the “DMX Value” column with values taken from the fixture's DMX chart. 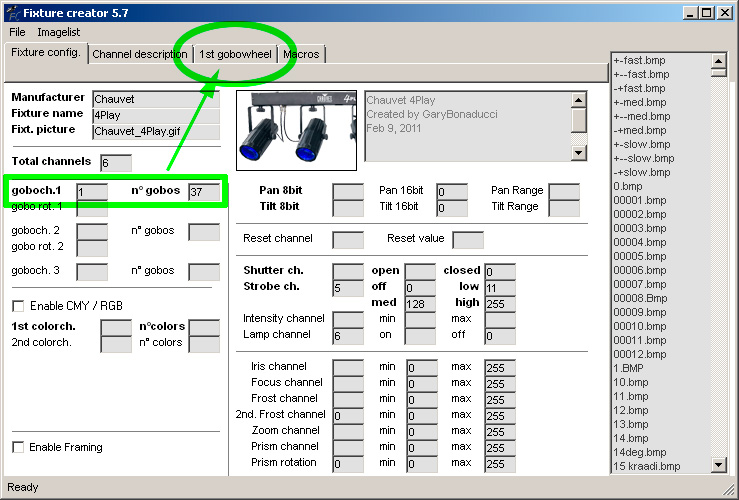 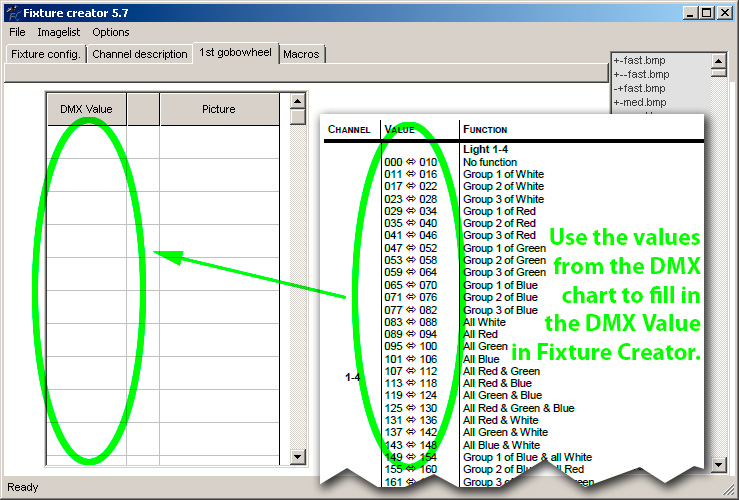 After the DMX Values were entered, the appropriate pictures were placed. This fixture uses custom-designed images to match the light patterns.

This completes the “1st Gobowheel” tab that generates the DMX values used in the formulas.

Before making your Formula macros, you may want to create any regular macros first. This way, the regular macros will appear on the top of the FreeStyler Macros window. If you need a refresher on creating macros, see the Macros Tab example in the Moving Head tutorial.

The Formula used in the Chauvet 4Play fixture is very simple. It is “CHxx=CH01”, where “CH01” is selected using the Gobos window (above), and “CHxx” corresponds to the fixture's channels 1~4. For convenience, we want the macros to appear in FreeStyler's Gobos window too, so that has been assigned in the “Show In” column. 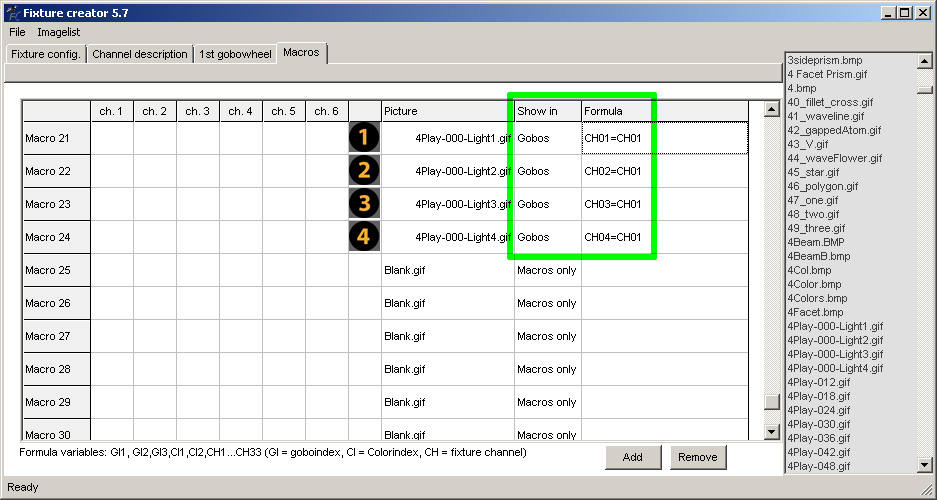 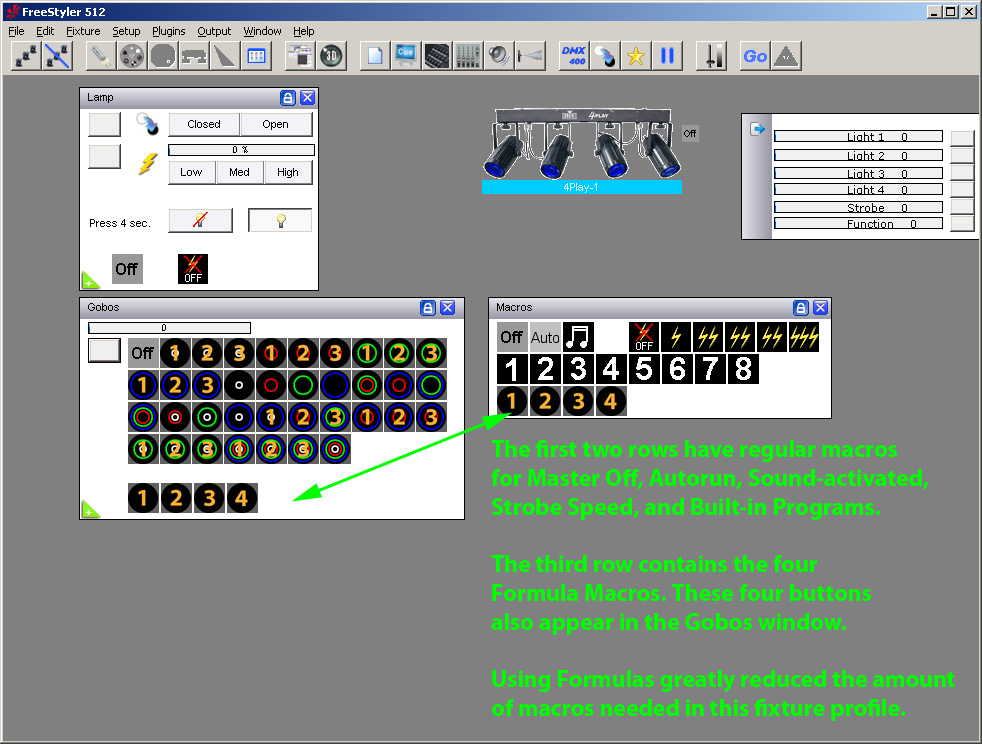 This example showed how very simple Formulas have been able to greatly reduce the amount of buttons needed to be used on FreeStyler's Macros window. Instead of possibly having more than 148 buttons for each of the LED patterns the four lamps can create, this fixture profile uses only 20 buttons on the Macros window. The fixture's 37 different LED lighting patterns have been placed on the Gobos window and macros were also added, making programming much easier.